Early Growth of the Southside

C.M. Titus was an early resident of Southside. In 1868 Titus bought a 360 acre piece of land and began to build on it. In order to drain the land and improve it for construction, Mr. Titus dug a new channel for Six Mile Creek through his swampy property. He laid out two streets on either side of Six Mile Creek, and named them after himself (North and South Titus Avenue). Mr. Titus built the Sprague House at the corner of South Albany Street and North Titus Avenue, for his wife’s brother-in-law, Mr. Joseph B. Sprague.

Many of the houses along South Albany Street and along Hyers St. were built by Andrew C. Hyers. He sold the houses for around $2,500 apiece during the years between 1904 and 1929. Purchasers could pay a deposit of $100, and $15 a month to buy a house. People who earned about $0.50 per hour were able to afford Mr. Hyers’ houses.

In 1917, Anna Quackenbush, a young nurse, came to Ithaca to help treat and prevent the spread of the contagious disease polio. Anna Quackenbush became friendly with Mary Hibbard, her boarding house landlady. Miss Hibbard became interested in Anna’s work, and began to take care of children who had been stricken with polio. Ms. Hibbard decided that Ithaca needed a place where young polio victims could receive care after their illness, and she organized a group of friends to raise money. They held luncheons, dinners, bazaars, and other events. 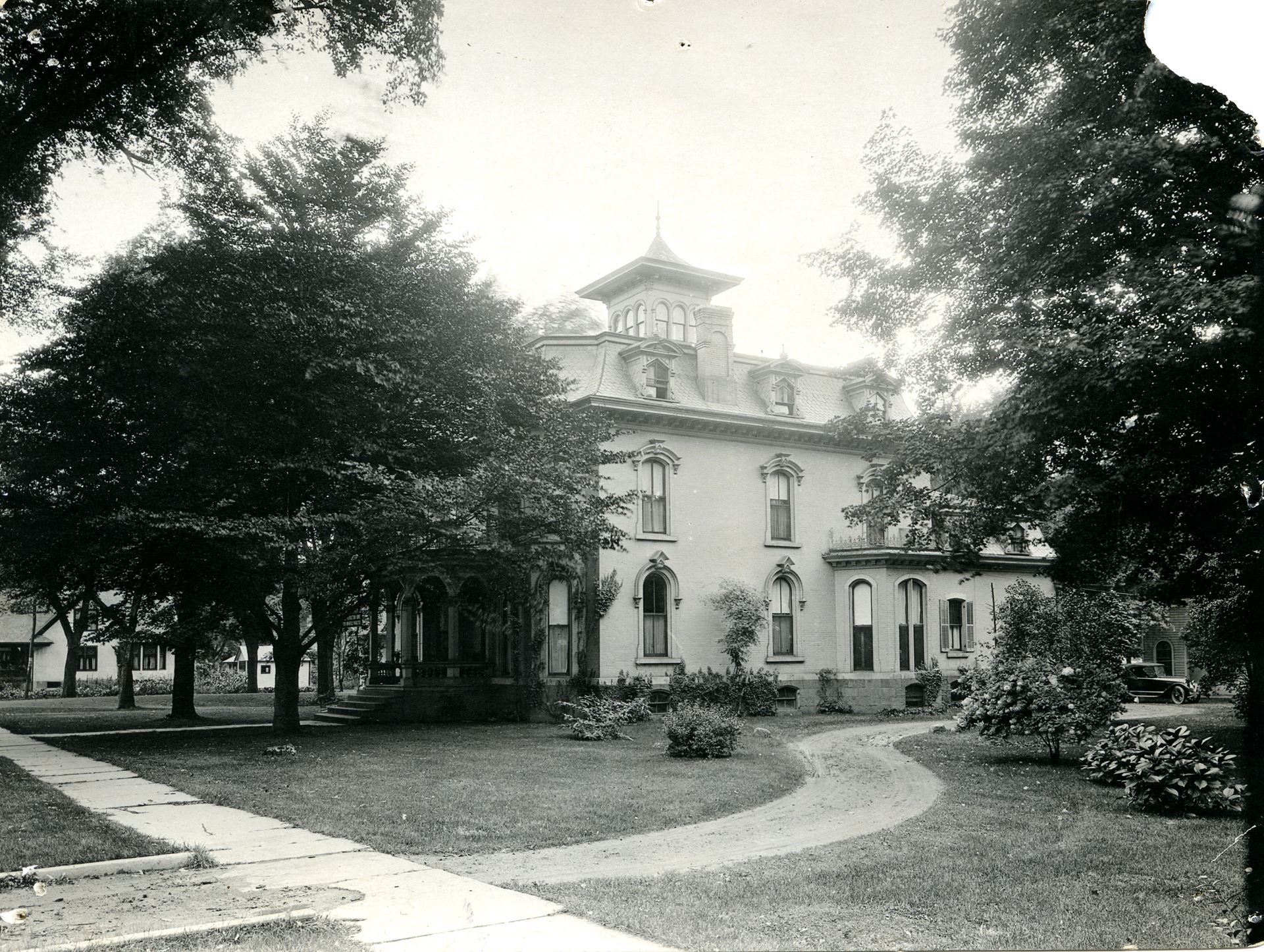 Miss Hibbard raised enough money to rent a house on South Albany Street and it opened as the Reconstruction Home in 1920. The Reconstruction Home was the first center of its kind in the United States, dedicated solely to the care of polio victims. The atmosphere was cheerful and friendly, and the most up-to-date treatments were used. Many Ithacans and Ithaca organizations supported the Reconstruction Home, including the Elks Club and Cornell University (which donated fresh fruits and vegetables from its farms, and free tickets to events).

The children at the Reconstruction Home were tutored so that they could keep up with their studies, and they received physical therapy to help them recover use of their limbs. The Reconstruction Home was such a success that it grew too big for its building, and a large addition was built in 1929. Franklin Delano Roosevelt, who was himself a polio victim, visited the Reconstruction Home when he was Governor of New York State. Other famous visitors included Amelia Earheart (aviator), Jack Dempsey (boxer), and Helen Hayes (actress). The institution kept growing and needing further improvements and additions.

After the polio vaccine was developed, and the number of polio victims dropped, the Reconstruction Home became more of a nursing home. In the late 20th century the Reconstruction Home was renamed the Beechtree Center for Rehabilitation and Nursing, and now serves mostly elderly patients, and some younger patients recovering from accidents of illnesses.

This is a summary of the Southside chapter by Claudia Montague in the book Ithaca's Neighborhoods, Edited by Carol U. Sisler, Margaret Hobbie, and Jane Marsh Dieckmann. Ithaca's Neighborhoods the Rhine, the Hill and Goose Pasture was digitized by the Tompkins County Public Library in 2009 and can be read in full on their website.

Peter Webb, a hosteler at the Ithaca Hotel who had bought his freedom in 1818 from John James Speed of Caroline, met with friends about the formation of a church in the early 19th century. The local AME Zion congregation was chartered on December 16, 1833. During its first two years, the Ithaca congregation met in a residence at the corner of Green and Geneva Streets. A building lot was purchased on Wheat Street (now Cleveland Avenue) in 1836 for five dollars from Richard DeWitt, son of Simeon DeWitt. Construction on the single room, stone meeting house began in the same year and, as the congregation few, the building was expanded upward and outward, making St. James the oldest continuously used church in the City of Ithaca.

Many notable individuals, some of the most outspoken advocates for the abolition of slavery, attended and spoke at the Zion Church in Ithaca; they included Frederick Douglass, Harriett Tubman, and Reverend Jermain W. Loguen. Reverend Loguen, the "King of the Underground Railroad", was the pastor of St. James from 1852-1879, ascended to the level of bishop within the African Methodist Episcopal Church.

St James AME Church is said to have been a station on the Underground Railroad, and although there is little written record about individuals involved, or the locations of the stations since harboring runaways was illegal and "stationmasters" were at great risk after the passage of the Fugitive Slave Act in 1850. An association with Harriet Tubman and Ithaca's proximity to Auburn suggests that the church and its congregation, many of them formerly enslaved, were actively ensuring safe passage for those seeking freedom. In recent years a monument to the members of Ithaca's early Black community who enlisted at St. James for Civil War service in New York's 26th Regiment US Colored Infantry was placed in a small park adjacent to the church's east side.

After the Civil War, as Ithaca's Black community grew, it was necessary to provide a larger sanctuary in the church. A clapboard sided, two-story, gable roofed auditorium was added atop the stone "meeting house" between 1861-1872. A vestibule was added to the southeast corner in 1895, and the two-story belfry tower was completed in 1904.

In 1906, seven Cornell University students disgruntled by the discrimination they encountered in the fraternities, met at 421 N. Albany St. and founded the first intercollegiate Greek-letter fraternity established for African-Americans, Alpha Phi Alpha. St. James was instrumental in the establishment of the fraternity, providing a place to meet while offering moral support and guidance to early members.

In recognition of its significance as a physical and spiritual representation of cultural and religious history in Ithaca and to the Black community it continues to serve, the St. James AME Church was listed as a city historic landmark in 1975 and one year later, was listed on the State and National Registers of Historic Places.

This is a modified summary from the 'That Old House of Worship - A Tour of Religious Buildings in Downtown Ithaca, New York' brochure produced by Historic Ithaca in 2013. 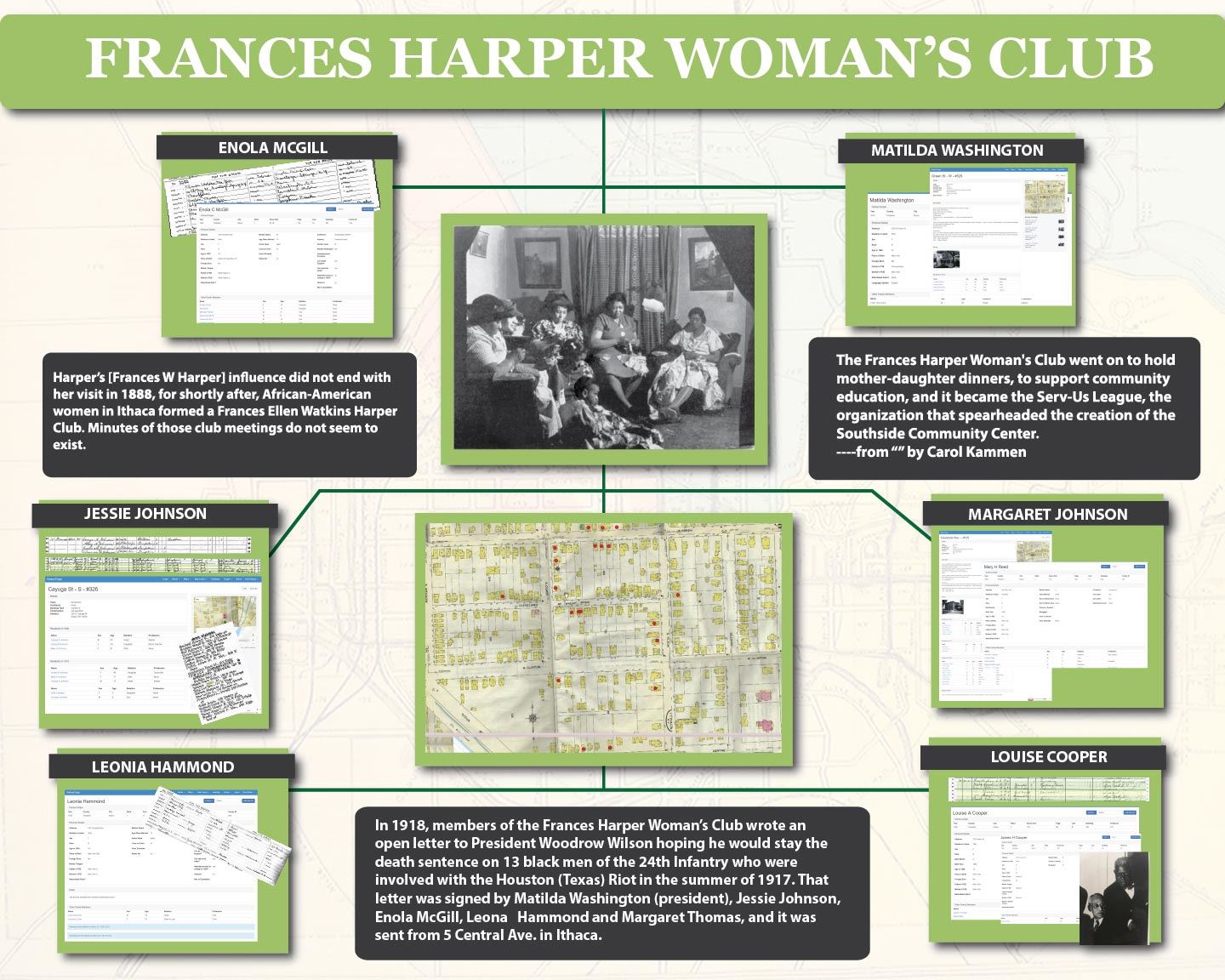 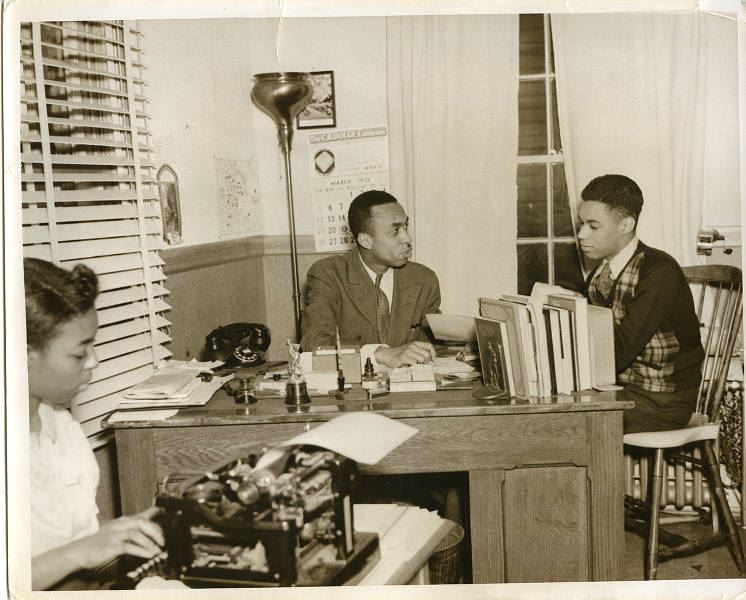 There was also a health committee, a nutrition clinic for pre-school children, and a journalism class that published a weekly newspaper. Job training was a crucial component of the Southside experience under Mr. Gibbs. He, along with his wife Hortense, played a vital role in expanding the limited job opportunities open to blacks in Ithaca in the mid-20th century. High school students who participated in training programs at the Southside were among the first African Americans to break the color barrier in professional Ithaca. A high school student Mr. Gibbs trained became the first black secretary at Cornell University, and later became the Head Secretary in Cornell’s History Department. Mr. Gibbs worked closely with companies like the Ithaca Gun Company and Cayuga Tool Company in arranging for the hiring of black employees in the 1930s and 1940s. Mr. Gibbs left the Southside in 1944 and embarked on another chapter in his full life of community service. He was the first African American to work at the Ithaca Post Office. He later became a district representative for Mohawk Airlines, where he was instrumental in Mohawk’s hiring of the first Black stewardess in the United States.